What’s it all about ?

Bascially data is retrieved from a consciousness field beyond time and space which stores information about quite everything. This is done by holding a thought in mind like for example “my neighbor did some gardening yesterday”. The statement will yield a true or false response depending on the fact if the neighbor actually did some gardening that day. And this without the subject consciously knowing any information about the neighbor at all. Confused or even excited? Yes you got it, anything that happened or any kind of information you can think of is already available and accessible for free, right now.

Getting to know the basics

Beginning in the 1960’s Dr. George Goodheart developed Applied Kinesiology, which uses a simple muscle test to determine whether a certain remedy is beneficial for the body or not. If a tested muscle stayed strong, a substance was good for the body, and if it went weak, it was not.
Later in the 1980’s Dr. John Diamond continued the work and discovered that different images, paintings, music and objects affect the muscles strength as well. The findings of Diamond showed that everything we interact with either strengthens or weakens our life energy.
At the end of the 20th century Dr. David Hawkins found out that the muscle test really turns out to be a non-local response from the field of consicousness itself. He has taken Diamond’s work further, through the discovery that the kinesiologic response also reflects the capacity to differentiate truth from falsehood and the actual degree of truth. In the early 2000’s he tested anything and everything and documented the results that he called calibrations. Among them were calibrations of people, animals, buildings, sports, businesses, philosophical concepts, scientific theories, statements, books and whatnot. The implications of the work were startling.

The Theory behind it

Spiritual revelation by a few mystics showed that pure awareness is the irreducible stratum of life itself. The subjective knowledge and experience of these advanced states of consciousness brought forth an instantaneos understanding of how reality operates. This understanding correlates with the theories of Quantum Physics, Nonlinear Dynamics, Chaos Theory and Attractor Research and some terms from these sciences are used to describe the findings.

Is a subfield of nonlinear Dynamics and examines dynamic systems which are chronologically unpredictable, though still deterministic. Also called deterministic chaos, these systems are highly dependend on initial conditions. They are non-linear in practice. To determine the behaviour of the system on a spiceific time in the future the initial conditions have to be known with infinite precision. Therefore practical predictions can only be forecast for short periods of time like in meteorology (e.g. the butterfly effect).

Is a subfield of the theory of dynamic systems where differential equations contain nonlinear functions. The solutions of these nonlinear equations show interesting characteristics like plots in phase spaces known as attractors and fractal structures under certain conditions. 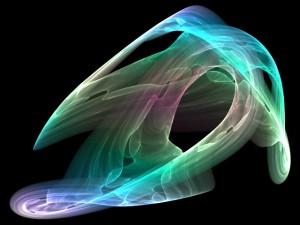 The term attractor is derived from the theory of non-linear dynamics and describes a subset of phase space (meaning a specific amount of system states) to which the  dynamic system converges and which the dynamic system does not leave. This means that a certain value, curve or sub space comes to and stays near the attractor because of its inherent pull and potential. The attractor is a strict recognizable structure which can be called a stable condition of a system.

In Quantum Physics when we move in the area of microscopic scope we see phenomena that are discontinuous with our understanding of Newtonian Causality and yet proved to be as real in observation and practice. These principles are already used in a variety of ways like in satellite communications, atom physics, solid state physics and so on. The nature of consciousness itself can be said to reside in a realm beyond time and space and thus shows characteristics related to quantum physics.

A quantum physics view of reality

In the paradigm of causality it postulates that A causes B causes C like billiard balls sequentially striking each other. But consciousness research indicates that the very nature of causality functions quite differently:

The very cause of a phenomenon is an unobservable non-deterministic attractor pattern which cause the detetministic A, B and C at the same time. But A, B and C from an observable linear point of view are still perceived as the cause of each other. The operants can then be seen as transcending both the linear and non-linear domain. This depiction is in accord with what physicist David Bohm describes as the enfolded and unfolded universe.

Through the technique of neurophysiologic modelling it has been discovered that there are classes of brain neuronal networks that act as attractors as a whole, though single neurons may behave randomly. These network classes of interconnected neurons operate within a series of limits and are defined by feeling patterns. These patterns are actually dominated by fields of consciousness which reside beyond the body and are activated by choice. Thus one’s consciousness can be said to be like a needle in electrostatic fields of different dominance. These different fields have been calibrated on a scale from 1 to 1000 and are presented on the Map of Consciousness©.

Ordninarily the processing of problems requires going from the known condition to the unkown answer. In nonlinear dynamics it is the other way around: from the unknown nondeterministic data of the question to the known answer. And this is the same process that is used by muscle testing. A high energy attractor pattern interconnected with the human nervous system via the meridians known in accupunture yields the response.

Getting to know  the numbers

Map of Consciousness of David R. Hawkins unfortunately had to be removed due to copyright issues. You can find it elsewhere.
You can find an outline through the link below.
©spiritualwiki, Germany

For most people the levels up to 500 are easily verifiable. To get an intuitive understanding of the map it is best to take a look at the massive amount of data that has been retrieved over the years.

Still with me? No need to, this is for the pros….

Choose a friend or a family member for testing. We’ll call him or her your subject.

Shape a ring by putting your middle finger on top of your thumb. Place your forefinger on the middlefinger in the ring and try pushing them apart while holding the favored statement in mind. 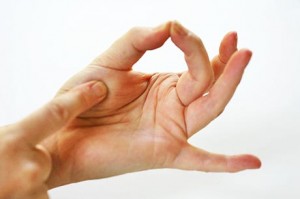 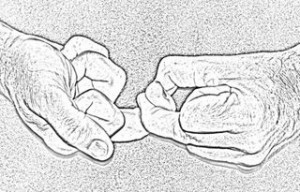 More to know about testing…..

Differing calibrations may be obtained over time or by different investigators for a variety of reasons:

Practical Applications can be found here.

Still questions ? You may find them here.

Some of the information above is taken from the Appendix of Dr. David R.Hawkins books and from the book Power vs. Force.